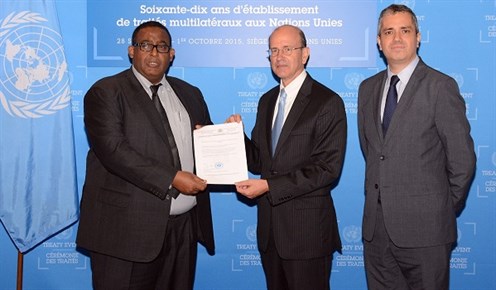 Somalia is the 97th State Party to the Convention on Cluster Munitions. An instrument of ratification was deposited with the Secretary-General of the United Nations at the UN headquarters in New York on 30 September 2015. Congratulations!

“After almost six years of hard work and encouragements, I am very happy to see that my government has ultimately ratified the Convention. This will pave the way to fully implement the Convention’s provisions and to clear all cluster bomb remnants in my country, mainly in border areas between Somalia and Ethiopia,” said Dahir Abdirahman of the Somalia Coalition to Ban Landmines.

In a 2014 statement, Somalia recognized that the needs of cluster munition survivors in the country are mostly unmet. The Convention calls on states to provide assistance, including medical care, rehabilitation and psychological support, and to provide for the economic and social inclusion of survivors, their families, and communities. Other States Parties in a position to do so have a legal obligation to provide resources and to support victim assistance in affected states.

Somalia is not known to have used, produced, transferred, or stockpiled cluster munitions. Cluster munition contamination believed to date from the 1977–1978 Ogaden War between Somalia and Ethiopia was discovered in 2013, but it is unclear who was responsible for the use. Cluster munition remnants pose a daily threat to nomadic people and their herds.

“We also urge other African countries still outside the Convention to come on board. We want to see the whole continent without cluster bombs,” added Abdirahman.

The vast majority of sub-Saharan African states have joined the Convention, but 14 still need to ratify it to become full States Parties. A small number are still outside the Convention: Equatorial Guinea, Eritrea, Ethiopia, Gabon, Mauritius, South Sudan, Sudan and Zimbabwe.

The Convention will enter into force for Somalia on 1 March 2016.

As a response to COVID-19 pandemic prevention and containment, SODEN in partnership with ABILIS Foundation – Finland, implemented a two-month period Emergency

Somalia’s Disability Empowerment Network (SODEN) Grieves the Loss of Five Somali Citizens Who Were Individuals with disabilities Due Symptoms of COVID-19 in Mogadishu Somalia.